This bug is kind of useless except if the specific driver is present, the debugfs is enabled, and the debugfs is somehow accessible to non-root users. I didn’t have the gaming laptop or GPU for this specific driver so I just copied the vulnerable function and function it is used in into QEMU for exploiting. The vulnerability was introduced somewhere in the Linux Kernel 5.8-rc2 branch and fixed in 5.14.15. I found it by auditing the source for a long time and reported it to AMD. They fixed the bug quickly and found other places it was present. I also reported it to MITRE and they assigned it the CVE.

The bug is a simple typo, we all make mistakes and C is unforgiving. Instead of wr_buf_size, size(which is user-controlled) is passed into all of the write functions, allowing SLUB buffer overflow. In the SLUB(Linux kernel’s heap), allocations are in placed into caches based on size. For example, an allocation between 32 and 64 bytes goes into the kmalloc-64 “slab” or cache and an allocation between 64 and 96 bytes would go into the kmalloc-96 slab(if there is one, otherwise the kmalloc-128 slab). There were three basic heap overflows in two in kmalloc-64 and one in kmalloc-128 SLUB. In dp_phy_test_pattern_debugfs_write

And then within the function the copy from userspace happens: 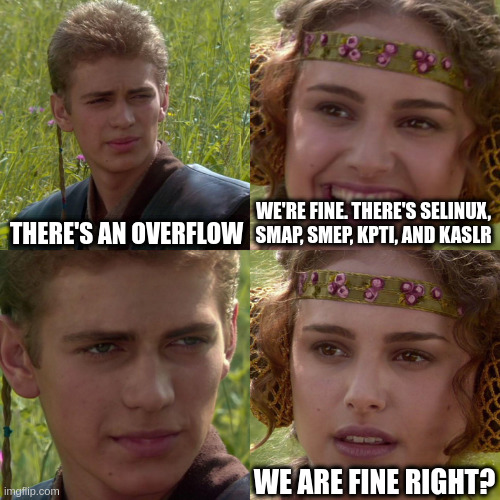 For the exploit I am using the default KASLR, SMEP, SMAP, and KPTI. Enabling SELinux wouldn’t effect the exploit but it would actually make it easier since the security pointer in msg_msg can be used for KASLR leak. Enabling FGKASLR also wouldn’t affect either exploit since modprobe_path isn’t a function and Function Granular KASLR only randomizes the addresses of functions in memory.

Using elastic objects you can overwrite the size of the next field so that copy_to_user copies more data. I chose msg_msg(created when message queues - a type of UNIX-like IPC are made) since it is easy to use for heap sprays.

The SLUB allocates the next chunk based on the freelist pointer which is a pointer to where the next allocation should be. So we can trick the SLUB to allocate the chunk of memory containing the modprobe_path(path of binary to execute if an invalid script is run) and give it to the user as a msg_msg in the text section(which is where userspace data will be copied into via msgsnd syscall).

Around kernel version 5.6 it was moved to the middle of the SLUB allocations to prevent single byte overflow exploits from overwriting it, however since this overflow is an infinite number of bytes it does not affect the exploit.

In order to get the freelist pointer directly after the victim chunk I sprayed a bunch of msg_msg objects(just allocating and freeing a bunch via msgsnd and msgrcv), to clean up the past allocations.

Cool now we can as an unprivileged user run the script we write in modprobe_path whenever we run a file with an invalid format(for more info read the link for modprobe overwrite). Code is here. In this example I wrote /tmp/x to modprobe_path which changes the permissions of the flag and moves it into /home/ctf from /root.

I spent a lot of time trying overflowing kmalloc-64 but I wasn’t able get a reliable kernel address leak. In kmalloc-128 the subprocess_info struct was the obvious choice but I don’t know any struct like that for for kmalloc-64(if you do contact me please). I was still able to leak kernel addresses they just were at random places all the time. In kmalloc-64, this overflow is possible to gain arbitrary write via the same way - overwriting the freelist. However if CONFIG_SLAB_FREELIST_HARDENED is enabled for the kernel, user page faulting is required to get a write primitive since the freelist is xored with random bytes making whatever is overwritten become gibberish. Using userfaultfd, I was trying to get an arbitrary write via FizzBuzz’s new strategy the Wall of Perdition. However, in kernel version 5.11 userfaultfd by non-privileged user is not allowed by default so it would not work in those versions. So instead overwriting some function pointer on the heap(and hoping no other fields are before it) and executing a ROP chain and KPTI trampoline would need to happen instead. Another way of exploiting is overwriting the freelist pointer’s last byte with zero to point to the buffer allocated in the vulnerable function(only would work in the times the last byte of the buffer allocated was zero). Then the attacker could use the use-after-free to get an arbitrary write primitive. Another mitigation is to prevent modprobe overwrite via enabling CONFIG_STATIC_USERMODEHELPER, the only way I can think of getting around is the Wall of Perdition strategy again which requires userfaultfd being available to the unprivileged user.

I’m a beginner so feel free to email me any tips/criticisms/corrections/questions. My contact info should be below.